To prove not everything I do relates to slot cars...

Today I assembled this 28mm beauty. 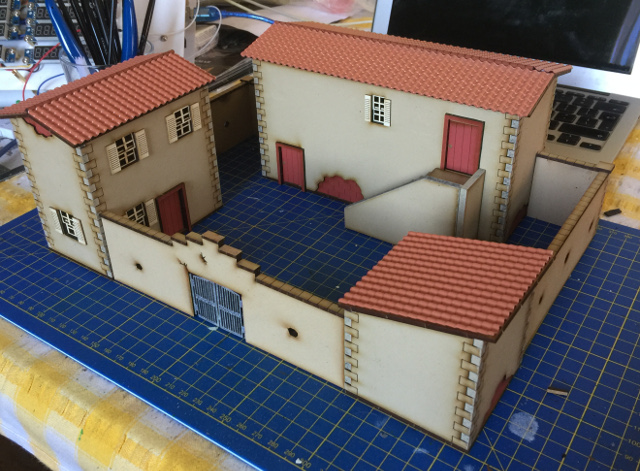 this one was £35 according to the bag it came in (I bought it a few months back) and is shown as it comes, just assembled, wants a bit of paint and I need to find a suitable sized placemat to use as a base. Not bad for three buildings that could be used individually and a couple of bits of wall.

walls nicely loopholed, and the main house has doors and windows to the rear so a defensible position but far from an impregnable one.

I got it for the Sharp Practice stuff, nice Peninsular War feel but could be used for WW2 southern France or Italy, Spanish Civil War, SAGA in that general area or just as a generic "farm house".

even though its painted its likely to get a bit of paint once the shops open back up as I want it a bit lighter and the roof to look less like plastic, but its perfectly usable as it is.
Top

You say Spanish, I say Italy, Crete or other generic sunny spot as well.

Range is intended for Italy, Spain, Portugal, runs from their ancient Roman stuff right to modern day really, they are seriously nice kits, Dave Cooke has a few (here currently) and I'm thinking of a few more, heck change the paint to be a bit whiter and dirtier and you have something that could be anywhere in Europe easily enough.

Also got a load of the roofing sheets separate as well, they are way nicer than laser cut MDF

really do have to get the rest of my Far Eastern stuff assembled, though that does need painting
Top
Post Reply
3 posts • Page 1 of 1

Return to “Historical and Semi-Historical gaming”